After 3 years of successful collaboration, David Lane MIFireE, AssocRINA, FRIN – CEO of Professional Rescue – has formalised his relationship with SkyBound Rescuer by joining the brand as the Director of Training Events. David brings a wealth of world-leading knowledge and experience to SkyBound Rescuer, to further its mission of shaping the future of drone lifesaving in emergency response.

David spent a full career in the Fire and Rescue Service (FRS), undertaking every role from Firefighter to Strategic Senior Officer working in three different services and at national levels. He famously undertook game-changing flood rescue research in North America and the EU and implemented the findings to great effect. Being awarded the prestigious ‘Higgins & Langley Medal’ for “developing a pioneering national swiftwater and flood rescue response model for the UK”.

As the CEO of Professional Rescue SAR Academy, a specialist company that operates as a fire, water and marine safety consultancy, training and assets resource provider at home and abroad; they have trained hundreds of first responders in water rescue, boat handling/rescue, flood response/rescue and helicopter aquatic techniques. 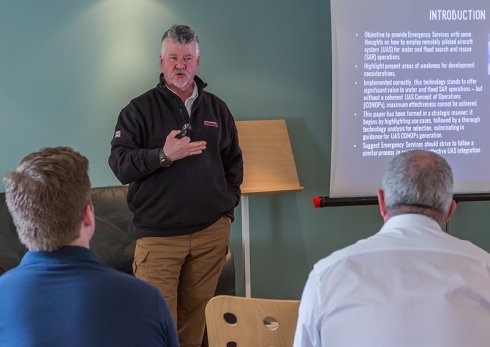 David maintains national, European, and international level interests in fire and rescue services and represent the industry for the IAEM to the Government, EENA, CEN, and has been involved in various roles including the following major international level strategic EU FP6/FP7/Horizon 2020 initiatives:

Most of these later projects involve the use of aerial vehicles ranging from heavy lift rotary wing craft to heavy and light drones for various objectives and roles.

David is a contributor and instructor for SkyBound Rescuer’s Rescue Drone Awareness course, with delegates from a variety of services from flood rescue teams, to fire & rescue services, to police forces; and co-authored many research papers and articles with SkyBound Rescuer’s CEO, Gemma Alcock. Not to mention, co-leading with Gemma on the successful ‘Life Saving – The Future’ video campaign that depicted a drone search and rescue story of the future.

All in all, David (a PPL holder and Commercial Drone Pilot) has been involved in a variety of drone projects that have been directed at SAR purposes; he feels passionately about enabling the future of drones as an invaluable SAR asset and will continue to play his significant role as a ‘SkyBound Rescuer’.